Katy Moss has been chosen as the winner of the Living Wage Leadership Award 2015 for the Yorkshire region. The Living Wage Foundation organise these awards to recognise the life changing impact individuals have made by leading the way on the Living Wage Campaign within communities. The awards are part of Living Wage Week 2015, a national celebration of responsible pay for everybody, running from 1st - 7th November. 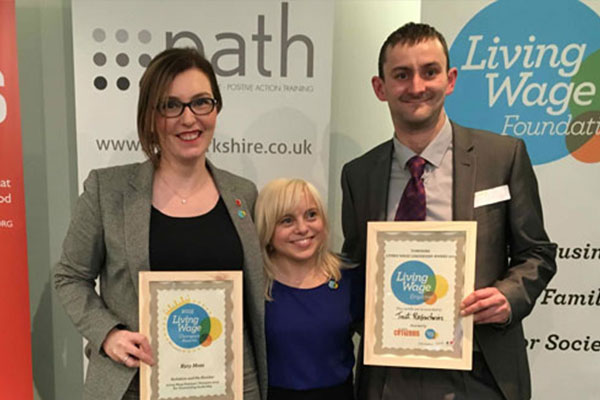 "Congratulations to Trent Refractories Ltd on being named the Leadership Award winner for the Yorkshire and Humber region. The voices of people are at the heart of our organisation, and it is wonderful to have Trent Refractories Ltd leading the way in Yorkshire and Humber. We want to celebrate the individuals making a real difference to families and communities across the UK. Thank you very much for celebrating the Living Wage."

"When I heard about this initiative I was totally behind it. I believe that people should be paid a fair wage for what they do, a wage that enables a reasonable standard of living. My hope is that by contributing in this way that it also takes the strain off the government having to subsidise hard working people with 'extra benefits' which are costly to administer. We have become the first Refractory company in the UK to implement the scheme, and have used our Institute of Refractory Engineers magazine to promote the awareness, we have also made the national press, featuring in the top 10 Living Wage Employers for the Daily Mirror.

Trent Refractories Ltd is a manufacturing company based in Scunthorpe. A large part of the economy there is the Steel Industry which we supply into. To be able to implement this scheme in such a deprived area and in our industry is very important and I feel sends a strong message to other employers to follow suit both locally and nationally."

We Are Hiring a Production Operative

Supporting British Manufacturing & The Made In Britain Campaign

HSE Inspection Undertaken With A Clean Bill Of Health